Surely, the Lord’s anointed is before Him 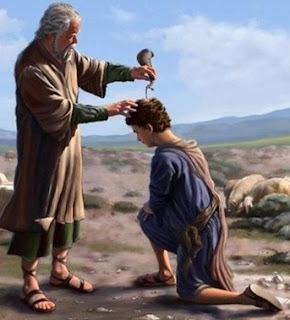 Samuel as a prophet who had walked with God, was a man of the Spirit. He had one-on-one encounter with God but was quick to miss-out God’s plan regarding who the Lord was to anoint as King over Israel. The word, “surely” is a strong word as it connotes certainty without any iota of doubt. A man who have a walk with God has some level of assurance that he Spirit of God leads him. So by experience, he has some surety when it comes to spiritual things. However, I have come to discover that in the school of the Spirit, humility and keen enquiry are very key to getting it right. Samuel was quick to display his credentials as God’s ordained prophet in pointing Eliab as God’s ordained King.
I have had experiences where I was “too sure” about some issues but ended up been “too shocked” because I relied much on experience than relying on waiting to hear from God.
When we hear the voice of God to start a journey, we must not continue or complete the journey with the voice of a man. Samuel heard from God to go to Jesse’s house but was not patient to hear further instructions, the result was that of carnal comparisons and sight satisfaction. It is a common occurrence today that people want to hear God to begin a journey and along the line, they relegate God to the background in their journey. At the end, it will not matter whether we started with God or not,rather, it will only matter that we continued and finished with Him and in Him. Our journey with God is progressive, there are information that God releases our way partly and progressively. If we regress, then we’ll miss His plans and purposes for our lives.
Samuel was not precisely told of who to anoint from the word “Go”; this shows that God seeks those who will depend on Him during the journey. It would cost God nothing to give Samuel all the information at once, but that will place glory in the hands of Samuel. Hence, reliance on God is the key. Likewise, it will cost God nothing to give you all the compass and direction that you need for your journey but He wants you to rely on Him through prayers, fasting, studying of the Word and doing His will.
We can also see that there is revelation in obedience. When Samuel obeyed by going to the house of Jesse, he had the revelation that God doesn’t work by sight. He got the understanding that God works by faith. He looks at the heart, rather than the outward appearance as men do. Today, many walk by sight and still claim to be godly. In their choices, they take critical decisions by sight and not fight (by “fight”, I mean “a good fight of faith”). In their journeys such as marriage, it’s about “the look”, “the book”, and “if she can cook”. But God wants us to consider the heart of every matter and of every decision. Like Samuel, when we hear from God, we much act because in acting, we activate other actions of God and receive grace to function in them.
After Samuel’s first mistake, his spiritual antenna became alert. All other sons of Jesse that came out for parade were out-rightly rejected because he could hear from God clearly now. Sometimes, it’s not as though we can’t hear God but there are some situations we just consider unnecessary to hear from Him. However, His Voice makes the difference in a state of confusion, depression, rejection, eviction, distraction. If God’s voice never came through, Israel would have lost a Warrior, a Sweet psalmist, a Prophet, an Uncommon Worshipper, Raiser of Mighty Men, and a Man after God’s heart. When we suppress His voice or refuse to hear His voice, we turn out losers, our best falls into the hands of the beast, we keep chasing the elusive in an endless cycle.
“And the Lord said, Arise, anoint him: for this is he (1 Samuel 16 vs. 12b)”. The voice of the Lord is the sweetest voice and clearest voice. It clears doubts, dissolves confusions, diffuses depression, extinguishes fear and douses uncertainties. May we hear that voice assuring, strengthening, exuding boldness and courage in us.
That voice quenches the fire, calms the raging sea, stills the storm, shuts the lion’s mouth, and closes the gates of hell and death……….HALLELUJAH!!!
By Ndubuisi Paul Okafor
November 2018.

Related posts:
No impossibility with God
Where art thou?
Bible verses on waiting
Thank you for reading.

2 thoughts on “Surely, the Lord’s anointed is before Him”